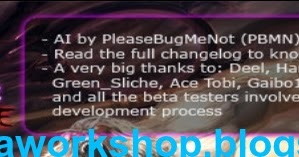 DotA AI v6.72f AI 1.2(update). Following IceFrog’s route, PleaseBugMeNot (DotA AI maker) has come up with a new AI version in which he has done some miscellaneous bug fixing and optimization.

Other than that, he assured that DotA 6.73 AI development is underway and will be released when it’s ready. In the meantime, you can play DotA 6.72f AI v1.2 and have fun.

Thanks to PBMN for the prompt update. Hopefully, this resolves all the previous glitches with AI players. More updates coming soon, stay tuned.